on September 27, 2018 Posted in Uncategorized No comments 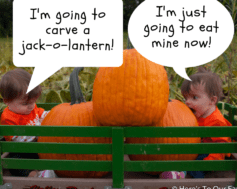 Look at these beautiful pumpkins we picked in the patch! They’re absolutely adorable, aren’t they?

What’s that you say? Those are 11 month old baby girls, not pumpkins? Well, I suppose you’re right about that. They are absolutely adorable though.

The girls wanted to pick out their first pumpkins. Naturally, they chose THE BIGGEST PUMPKINS THEY COULD FIND! The pumpkins weigh more than they do!

Its crazy to think that in less than a month, these baby girls will be one year old. Before we know it, they’ll weigh as much as those pumpkins!